Dr. Lopez discusses the gram positive rods/bacilli which are perhaps lesser well known to the clinician but have important clinical relevance nonetheless. He first discusses the classification system for these bacteria. He then descibes coryneform bacteria other than C. diphtheriae, such as C. jeikeium, which can cause both community-acquired and nosocomial infections. Next, Dr. Lopez discusses Bacilli other than B. anthacis. Erysipelothrix rhusiopathae is an example of this category. Next mentioned are anaerobic non-spore-forming gram-positive rods. Cutibacterium is an example of a pathogen producing infections associated with pustular skin eruptions and infections of implanted hardware. Anerobic spore-forming rods such as Clostridium are a major cause of human infections, including gas gangrene, C difficile, and others. In the end, the listener can easily be convinced that the spectrum of gram positive organisms are equally as diverse as the better known group of gram negative bacteria. 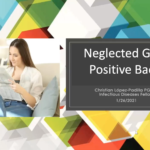